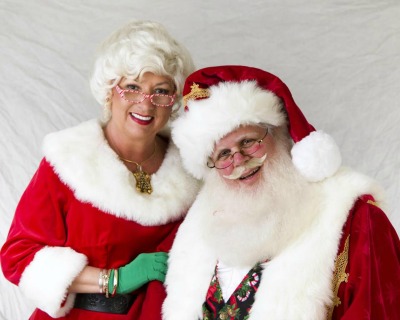 While Tim Cavender serves as public information officer for the Cherokee County Fire Department, he also concerns himself with Santa’s reputation. It’s important for him to do this, since he spends a portion of each year walking in Santa’s boots.

When I met Santa Tim in his delightful toy shop, I discovered a man who strives to live up to Santa’s stellar image.  Tim has a generous heart full of love for children and the joy of the true meaning of Christmas.  He credits his dad, who made sure the magic of Christmas sparkled in the Cavender household.  His father also conveyed the value of a life of integrity to his children. Tim has held onto this honor since he became Santa at the age of 15, when asked to portray Santa in high school.  He almost declined because he thought the other teens would poke fun, but he learned that even teenagers love Santa.  Since then, Tim has donned a Santa suit for 40 years. And for the last 15 years, he has spread the joy of Christmas with Mrs. Claus, Pam Cavender.

One of Tim’s favorite memories as Santa was the year a little girl sat on his lap and asked, “Will you bring my daddy back from Afghanistan?”  Through a series of circumstances, Tim was asked to be present at her home when the girl’s father returned home.  This moment was captured by a local television station and aired on CNN.  View the clip here –

This is just one of many of Santa Tim’s precious moments, like the time a sick little girl missed Santa’s visit because she was admitted to a hospital.  After his event, Tim took the trek to visit her.

“When her eyes became wide with wonder the moment I walked through the door, I knew I had made the right choice” Tim said. “That visit changed me forever. Words cannot describe the thrilling satisfaction God blesses me with when I experience encounters like this.”

When I asked Santa Tim for his Christmas wish, he said, “I hope everyone would make an effort to spend some quality time with their loved ones.  This is what Christmas is about.”

And to the naysayers who say Santa takes away from the true meaning of Christmas, Tim answers: “Who’s to say the legend of Santa wasn’t dreamed up to bring love, laughter, and a sense of joy back to children?  In a world full of misery and chaos, Santa helps the world focus on the most important day in history: the day the Bethlehem star pointed to where our Savior was born.”

For more information about Mr. and Mrs. Claus, visit: www.timandpamcavender.com