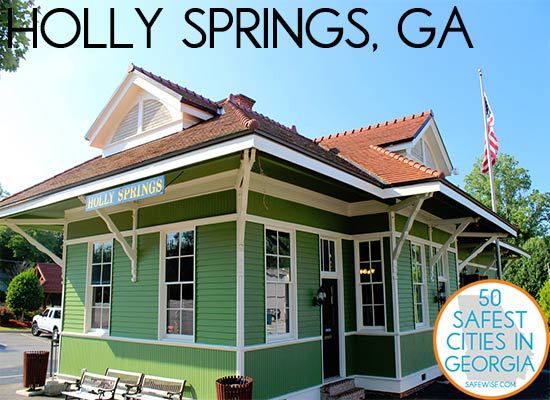 Both Holly Springs and Canton were named to the recent SafeWise Report listing their 50 Safest Cities in Georgia.  Holly Springs placed fourth, with Canton placing eleventh. To compile this report, SafeWise used the most recent FBI crime data from 2012, population, and other ranking factors, like unique safety initiatives and security programs implemented within the past few years. The report considered Georgia cities with populations of 5,000 residents or more, and then narrowed the list down to 50 and assigned rankings according to how the city met the criteria.

The report noted that besides being an outstanding city in which to raise a family, Holly Springs has a low crime rate that included only seven motor vehicle thefts and no cases of murder or arson in 2012.

Canton was noted for managing an exploding population over the last 10 years, growing from 3,500 residents in 2000 to more than 23,000 in 2012. A large contributing factor to this growth was credited to Canton’s renewed dedication to fostering businesses, particularly new startups, which has attracted more business people and entrepreneurs.

Auburn, GA in the northern part of the state ranked number one as the safest city in Georgia. The only cities in metro Atlanta to rank higher than Holly Springs were Johns Creek at number two and Milton at number three.

SafeWise is a community-focused security organization that is the source for everything safety and security. They help you compare the top security companies so you can best protect your home the way you want to. The SafeWise Report provides resources to help make homes and communities a safer place. For more information and to see the full report – Click Here.